Dolores Heurta, who protested alongside Cesar Chavez in the 60s and 70s to formalize rights for California’s farm workers, was in Washington, D.C. this week to speak out in favor of mandatory GMO labeling.

Huerta helped to acquire the first collective bargaining agreement between workers and an agricultural company in 1965 as noted in this article by E&E Publishing. She said that GMO labeling is a must for consumers who are starving for information on which foods contain the highly controversial ingredients.

“It gives the average consumer the right to choose,” said Huerta, speaking at a conference at the National Press Club yesterday. Huerta also attended a meeting at the White House to press President Obama on the issue. Obama promised labels for GMOs during his presidential campaign but has yet to make good on the promise.

Huerta added that her experiences protecting the rights and health of people in communities near farms from pesticide exposure has helped motivate her to speak out on the issue of GMOs and the need for labeling.

The event was organized by the Environmental Working Group, which has long been a supporter of mandatory GMO labeling and a large-scale reduction of harmful farming chemicals that are used on GMO and “conventional” crops.

The farming industry has long been in favor of using more harmful chemicals, Huerta said, with field managers even calling them “medicine” for crops during the 1970s.

The political climate surrounding such pesticides has changed drastically in recent years, however, as more and more studies have come out demonstrating their harmful effects including a recent one by the World Health Organization linking glyphosate, which is the main ingredient in Monsanto’s Roundup herbicide, to cancer.

For more on the event and Huerta’s speech, check out the full article here.

A new bipartisan bill that would give Americans more information about what’s in their food was reintroduced on Thursday, Feb. 12 in both the U.S. Senate and House, as announced on the Center for Food Safety’s website.

“We cannot continue to keep Americans in the dark about the food they eat,” said Rep. Peter DeFazio.

“More than sixty other countries make it easy for consumers to choose. Why should the U.S. be any different? If food manufacturers stand by their product and the technology they use to make it, they should have no problem disclosing that information to consumers.”

Chef Tom Colicchio also joined them to add his voice to the discussion.

“The public wants more information about the food they are buying and how it’s grown,” said Colicchio, owner of Craft Restaurants and co-founder of Food Policy Action. “I applaud Senators Boxer and Blumenthal and Representative DeFazio for their leadership and urge their colleagues to join them in standing up for the 93 percent of Americans who want to know whether their food has been genetically modified.”

In total, over 1.4 million signatures have been collected on behalf of people demanding their right to know whether their food contains GMOs, a right which is afforded to residents in over 60 countries.

“We’ve run the first 20 years of the GMO experiment and now know that in fact GMOs require more herbicides over time. With even more toxic compounds like 2,4-D and dicamba being approved for use on GMO crops, consumers should be able to make informed decisions about what food they’re buying.”

As noted by the Center, Labeling opponents are pushing a bill that would pre-empt GMO labeling laws already in effect in Vermont, Maine and Connecticut, as well as pending legislation in more than 20 other states.

The legislation pushed by the opposition is known much-maligned (and misleading) “Safe and Accurate Food Labeling Act,” which has been dubbed by activists as the DARK (Deny Americans the Right to Know) Act.

The DARK Act was actually introduced by a powerful pro-GMO food lobby (learn more about it here along with how you can help stop it).

Nick Meyer writes for March Against Monsanto and the website AltHealthWORKS.com. 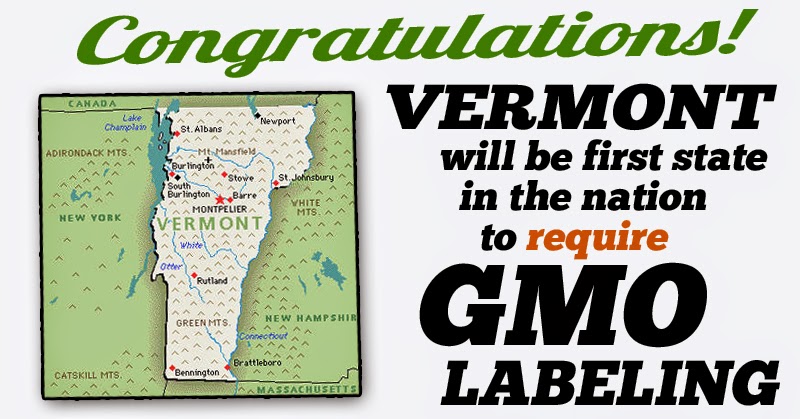 His announcement came just minutes after the House gave H.112 final legislative approval by a 114-30 vote.

"I am proud of Vermont for being the first state in the nation to ensure that Vermonters will know what is in their food," Shumlin said in a statement. "Vermont has led the local food movement that is better connecting people nationwide with the food they eat."

The bill would take effect July 1, 2016. Other states have labeling laws that go into effect when neighboring states pass similar policies.

Sen. David Zuckerman, P/D-Chittenden, has been pushing for GMO labeling for much of his career in the state Legislature. Zuckerman was first elected to the House in 1996.

"Vermont has now put a stake in the sand around food transparency, and it may well help create that across the country, much as we did with marriage equality and other historic measures," Zuckerman said.

There will be challenges ahead, he said.

Find a March Against Monsanto near you: Local Marches

Find Local Food and Farmers Markets at the eatlocalgrown project. #occupy monsanto - we march on may 24th!

October 2013 Detroit held its March Against Monsanto on the heels of a Pink walk/run. We started 3 blocks away from where that walk ended. As those who came out for a cure were leaving they saw us marching. Many questions were brought by those who had just walked their path toward a cure, raising money in that endeavor.

We told them this thing we were marching against is what creates the cancer, it is what makes us sick in many ways, it is unnatural and we are not informed of the dangers lurking in our food and in the medicines used to treat the illnesses that result. There are no warning labels and there should be. It took a battle to win warnings on cigarettes and removal of advertising. This battles against GMO (Genetically Modified Food) is that big, and more. It infests the things we need to eat, not just a dirty desire.

May 24 #WaveOfAction #MAMdetroit walk with us for more than a cure. March against the cause of cancer.